Electronic surveillance system has been set up along Indo-Bangladesh border: Defence Minister. Bangladeshi infiltrators to be completely curbed. 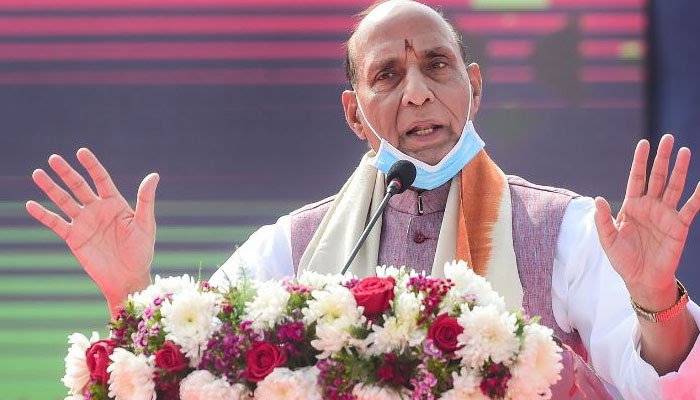 GUWAHATI : The defence minister said that there is also a propaganda on the role of BJP in respect of the revised Citizenship Act (CAA) and the National Register of Citizens (NRC). Referring to the repeated floods in Assam, Singh said that all efforts will be made to solve the problem when BJP comes to power again in the state and Assam will be made a flood free state. Addressing an election rally in Hozai district of Assam, Defence Minister Rajnath Singh said, the BJP government has set up an electronic surveillance system along the entire Indo-Bangladesh border in Assam to check infiltration from the neighbouring country. Appealing to all to avoid politics on illegal infiltration, Defence Minister Rajnath Singh said, if the BJP came to power, Bangladeshi infiltrators would not be allowed to enter Assam at any cost. “We will not allow Bangladeshi infiltrators to enter Assam at any cost,” he said. We will not allow politics on illegal infiltration. Singh said that there is BJP government in Assam and Tripura. In West Bengal also, BJP will come to power this time. Then, the problem of infiltration from Bangladesh to these three states will be solved. He said that government education will be done completely free of cost till 8th standard and all landless people will be given land lease. “By 2022, there will not be a single person in Assam who will not have a paved roof over his head… We will give bicycles free of cost to the students. “Our Prime Minister Narendra Modi has a 56 inch chest. India has now emerged as a very powerful country in the world. No one can dare to see our eyes on our side today. The senior BJP leader said that Prime Minister Narendra Modi opened bank accounts of poor people to eliminate middlemen in welfare schemes. He said, “Assam has a magnificent runner Hima Das. If the BJP comes to power, the pace of development will be faster than the pace of hima das. However, with its vigor and adventures, the Assam Rifles is celebrating its 186 foundation day today. Assam Rifles is India’s oldest paramilitary force. The force was formed on 24th March 1835 with the recruitment of about 750 Jawans. However, the number of Jawans in this organization with 46 battalions has now reached around 65 thousand. The Assam Rifles has hoisted the flag of its success everywhere with its strength, valour, vigor, bravery, courage and zeal. Defence Minister Rajnath Singh has greeted the rifles personnel and their families on the occasion of the foundation day of Assam Rifles. “Congratulations on the foundation day to all Assam Rifles Jawans and their families,” he wrote in a tweet. Assam Rifles is India’s oldest paramilitary force which has been protecting India for nearly 19 decades. The courage and professionalism of this force is commendable. The Assam Rifles is led by the Indian Army, but it is fully controlled by the Home Ministry. While salaries, allowances and ranks, etc., are under the purview of the Army, the Ministry of Defence. The Assam Rifles was formed in 1835 in the name of Cachar Levy. It is the oldest police force in the country. This force is called the sentinel of the north-east and a friend of the hilly people. The rifles have a dual responsibility for internal security of the North Eastern Region and security of Indo-Myanmar border. The role of Assam Rifles in bringing the north-eastern region into the national mainstream has been commendable.

When the country celebrates 75 years of independence, there will be no poor roof of Hindustan without a firm roof: PM Narendra Modi.

Mercury Rises After 4 Days Of Rains, Snowfall In Kashmir

Bihar is committed to eliminate Filaria.

Community participation is the only way to eliminate Lymphatic Filariasis.Sanjay…

Baramulla Firing Incident ; Mohsin was taken aside and than fired on his both legs by army, alleges family