Government should role back notifications of economic slab…

Chairman hope on earth expressed extreme gratitude over the…

Message Sent: Say No To mask and Yes To Corona 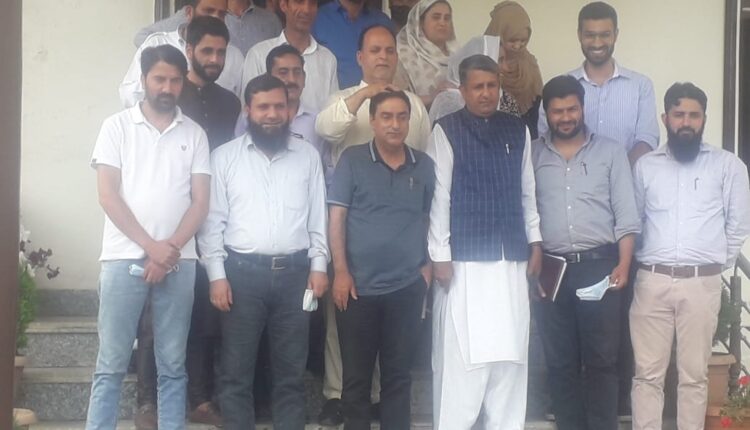 Those who are supposed to set an example encourage otherwise with their irresponsible actions.

Kupwara: As Covid cases are declining day by day across Jammu and Kashmir, the guidelines go for toss accordingly in the frontier district of Kupwara.

Top brass members of the District adminstration were found violating Covid SOP’s while common people are strictly ordered to follow all the precautionary measures in order to get rid off of the deadly virus.

People have raised several questions on this viral photograph in which Administration and elected members can be seen posing unmasked while on another hand same Administration keep bragging about SOPs.

Our ‘Babos and Naatas’ should understand the reality of the trickle-down effect of any order. The trend goes down from the hierarchy and motivates, inspires the common public.

Will any law enforcement agency set an example against this irresponsible act and Penalize them for Red cross contribution.
No, I am not seeing such a thing anytime soon because the accountability is for powerless and powerful people to get away with heads high held.

Common masses are blamed for every evil and now the adminstration is sailing in the same boat. In this photo which has gone viral, it’s not any clarck or some Grade three employees , it is the District Magistrate Kupwara, ADDC Kupwara Nazir Ahmad Lone, Vice Chairperson DDC Kupwara Haji Farooq Mir who are openly violating the norms of Covid guidelines.

When officers like DC, ADC, VC Chairperson are not following the guidelines then they have they keep no moral standing while issuing orders and advising people.

Father of three children’s ends his life in Sopore

Er Rashid, a strong votary of democracy in J&K abandoned in Tihar on ‘frivolous’…

Koshur Store has made it big; becomes Kashmir’s first startup to be valued over ₹300 million

Get Precautionary dose on priority, Director SKIMS to all frontline workers

AAI To Take Call On Flight Operation At Srinagar Airport At 4p.m.